Olive oil has been found to be effective against :

The phytonutrient in olive oil, oleocanthal, mimics the effect of ibuprofen in reducing inflammation, which can decrease the risk of breast cancer and its recurrence. Squalene and lignans are among the other olive oil components being studied for their possible effects on cancer.

Olive oil lowers the levels of total blood cholesterol, LDL-cholesterol and triglycerides. At the same time it does not alter the levels of HDL-cholesterol (and may even raise them), which plays a protective role and prevents the formation of fatty patches, thus stimulating the elimination of the low-density lipoproteins. 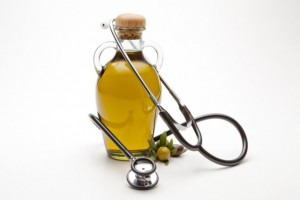 Olive oil is rich in antioxidants, especially vitamin E, long thought to minimize cancer risk. Among plant oils, olive oil is the highest in monounsaturated fat, which doesn’t oxidize in the body, and it’s low in polyunsaturated fat, the kind that does oxidize

It has been demonstrated that a diet that is rich in olive oil, low in saturated fats, moderately rich in carbohydrates and soluble fiber from fruit, vegetables, pulses and grains is the most effective approach for diabetics. It helps lower “bad” low-density lipoproteins while improving blood sugar control and enhances insulin sensitivity.

Although high in calories, olive oil has shown to help reduce levels of obesity.

Although the reasons are still not fully clear, recent studies have proved that people with diets containing high levels of olive oil are less likely to develop rheumatiod arthritis.

A high consumption of olive oil appears to improve bone mineralization and calcification. It helps calcium absorption and so plays an important role in aiding sufferers and in preventing the onset of Osteoporosis.